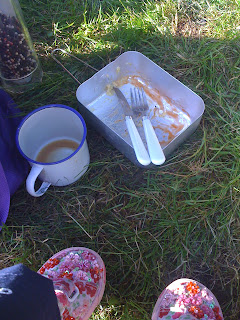 Ah the first camping trip of the year, the excitement, the planning, the getting-out-the-old-stuff and checking it over, the buying of the new stuff, the non walking child, the dog. We set off bright eyed and full of hope, the specially picked camp site only an hour away door to door to test Jack's staying power and Twizzle's guts. The car packed with people and stuff; tent wedged between Husband and Twizzle, cool bag balanced precariously atop the dog cage (it follows me wherever I go, I call it The Shadow), sweets, treats and doggy drops lined up along the dash board for just-in-cases and tears. I'd thought of it all ladies and gentlemen, this was going to be one flawless camping trip, yes siree.
The queue started about ten minutes from home, unusual at this time and would probably start moving in a few minutes. It did, very verry slowly. Note to blue Golf on the A429 to Stow: if there is a two mile queue behind you and a caravan is tailgating you, perhaps you may want to take your foot/feet off the brake and apply the accelerator. It's the pedal to the far right of the foot well. Next to the Brake, your favourite pedal.
I maintained my dignity, refused to sound the horn and an hour later glided smoothly past said Golf, head up, pleased at my restraint and calm in the face of extreme provocation. I looked in the wing mirror to see Husband signalling Isla to flip the bird through the back window, she did, expertly. Ah.
Note to blue Golf, bird flipping child is not mine.
The camp site was just as promised, basic, rustic even and suitably outdoorsy for the Millennium Housewife family. Despite our everyday personas of normal working Husband-in-suit, Housewife at home (blogging and bleating about it) 2.4 kids, get us camping and we change faster than Superman in a telephone box. It's as if our real lives are our Clark Kent disguises but when let out for the weekend we become the love-children of Ray Mears and Bear Grylls, all campy and kitted out.
It goes without saying that a camping trip always involves a visit to the local camping store. Where else to feel outdoorsy and really part of nature than when buying all the equipment needed to experience it? I don't know about you, but I always get a sort of jittery feeling when going into a camping shop. Think of all the things I could be! The urge to buy crampons/climbing ropes/freeze dried beef casserole, as you imagine yourself skipping up mountains like Tom Cruise at the beginning of Mission Impossible 2. The red mist comes down as the desire takes root, in your head you need these things, they're just what you need for the rest of the weekend to be successful, it'll show everyone how part of it all you are. Look at her they'll all say, she must do out doors things every week, and you know that they're imagining that once out of the camping shop you're off to do something indistinct but dangerous and clever. The fact that after the camping shop trip you're going to drive back to the camp site and have a quick kip before opening the wine is irrelevant. Irrelevant.
The best bit about this particular camping trip is that we had invited Uncle Matt. Everyone's favourite uncle and Husband's best friend, Uncle Matt comes unfettered by children/dogs/strange wife wearing crampons in a field. He serves as a bench mark by which we can measure just how much more cluttered our lives are than the last time we saw him and, (the painful bit) what our lives may have been like had we made different decisions/used contraception/said no to the dog.
He arrived ten minutes behind us, all smart car, expert parking and I've-had-enough-sleep-for-the-last-32-years grin, you've got to love him. Once parked, he proceeded to open his boot and set up his tent. It took four and a half minutes, neat and crease free, he had opened and repacked it before setting off to check it was sound. He then started to bring out neat, well kept gadget after gadget: a small metal table as an extra surface, a slightly larger table because, well you know, you might need another, slightly larger table, a cafetiere with attached bean grinder, a spoon/fork/knife contraption, neat packets of teabags counted out before packing. I held my breath, praying that the next item would be a camping black Top Hat out of which he would pull a fold up rabbit (a live one), but was disappointed to see only his fold away sofa, ah well, next time maybe.
Uncle Matt then proceeded to help us with our camp; the seven birth tent (fits dog and travel cot) that we still haven't cleaned since last year, the blankets and pillows, the complete lack of gadgetry, the copious amounts of Barbies/trucks. Oh I had packed well, everything (everything) the children could have cried for in the night had been thought of, blankies, teddies, duvets, Rabbit Clock, you name it Millennium Housewife had packed it. There were going to be no sleepless nights not attributable to the actual inconvenience and uncomfortableness of camping. Fab. What a fantastic mother I am.
But perhaps not Wife-and-supplier-of-comforts. There had been no room for anything Husband and I may need you see. I was more intent on the possibility (ha!) of sleeping that night. Oh dear. Still, Uncle Matt's spoon/fork/knife contraption came in useful (we wiped between users) and the fresh ground coffee was lovely. We didn't drink too much tea though, he'd only counted out enough for himself. He'll know better next time.
Posted by Millennium Housewife at 15:21 13 comments:

Careers I am now fully qualified for

Posted by Millennium Housewife at 09:18 14 comments:

It is the place guaranteed to reveal any flaws (any flaws whatsoever) in your parenting skills. The place in which, if you enter in a lighthearted I'm A Mummy And Aren't I Doing A Great Job mood, you will be crying and trying to sell your children to any shopper that dares show an interest by the end. The supermarket (or child market as I prefer to call the bit near the exit) is the place that Super Nanny always takes the parents and Very Bad Child at the beginning and end of the programme. A before and after shot, if you will, designed to show that ordinary parents Fail at the supermarket, and anything they Fail at will be highlighted here in a way that no other situation can show. By the end (shot at the same time as the beginning in different clothes with the children on Benylin? You decide), said Very Bad Child has become Reasonably Good Child, but only because mummy/daddy has engaged them in several highly intelligent games involving helping with the shopping. Now, I don't know about you, but I always make it a point to have a peek into the parent's shopping trolley at the end of the scene. It's nearly always empty, if there is anything, it is Jammy Dodgers, Dairy Lea Unmentionables or Barbie/Postman Pat spaghetti. In other words, things the parents have said yes to just so that the cameraman can get the shot and they can all go home. Anything else they may have wanted to buy has had to go by the wayside, simply because they were all too busy playing those stupid games to actually get around to buying anything.
Have you ever devised a Super Nannyesqe shopping game? I'll save you the trouble and tell you about mine. It took two hours of pre preparation at home, making and colour coding the chart (pink for Isla, blue for Jack - I have no imagination or issues about genderising the future population), another half an hour to get said chart into the car and away from the children who wanted to play it now. I then had to find a shopping trolley with two seats, one small enough for a one year old and one large enough for a four year old, Isla refused to walk you see as the chart game was a lot more fun than walking. We then spent a fruitful hour perusing the aisles looking for any of the things that Mummy had drawn on the chart and ticking them off. And here lay the flaw, neither child can read so the drawings were all they had to go on, and Mummy can't draw (do you see where I'm going with this), well Mummy can draw some things, but not can of coconut milk/smoked haddock/hair gel, so we ended up with a trolley of Jammy dodgers/Dairylea unmentionables/barbie and postman pat spaghetti, anything to end the chart game. Once the last unintelligible picture had been ticked off by each of them, I cheered wildly in the aisles, congratulated them both on a good job! lifted Isla from the trolley and proceeded to attempt my usual shop, just an hour later than usual.
Jack sat, gurgling and dribbling while trying to eat the trolley, bending double to get to just the right angle to cut his lip/lose a tooth, while Isla skipped beside me shouting slogans about why I should buy Cillit Bang/Philadelphia/Liletts and pointing helpfully at things we had no use for and suggesting we buy them. The only hairy moment was Isla disappearing, lost in tune, flapping her arms like wings, the sound of I feel like chicken tonight floating over the toilet roll aisle. But I had an answer to that; I steered them both skillfully to the cake aisle and let them choose whatever they wanted, anything that would get me round the supermarket without embarrassment or having to shout. Ha! One in the eye Super Nanny I thought, all your years of 'experience' and a cake would have done the trick just as well, and you could have filmed the before and after shot in a few hours. Cue scene with no cake and crying children, cut to scene with cake and biddable, quiet children. Job Done. And I didn't even try to sell them at the exit. Now where's my television contract?
Posted by Millennium Housewife at 20:30 7 comments:

Things I have said to my mother today

Posted by Millennium Housewife at 12:17 5 comments: